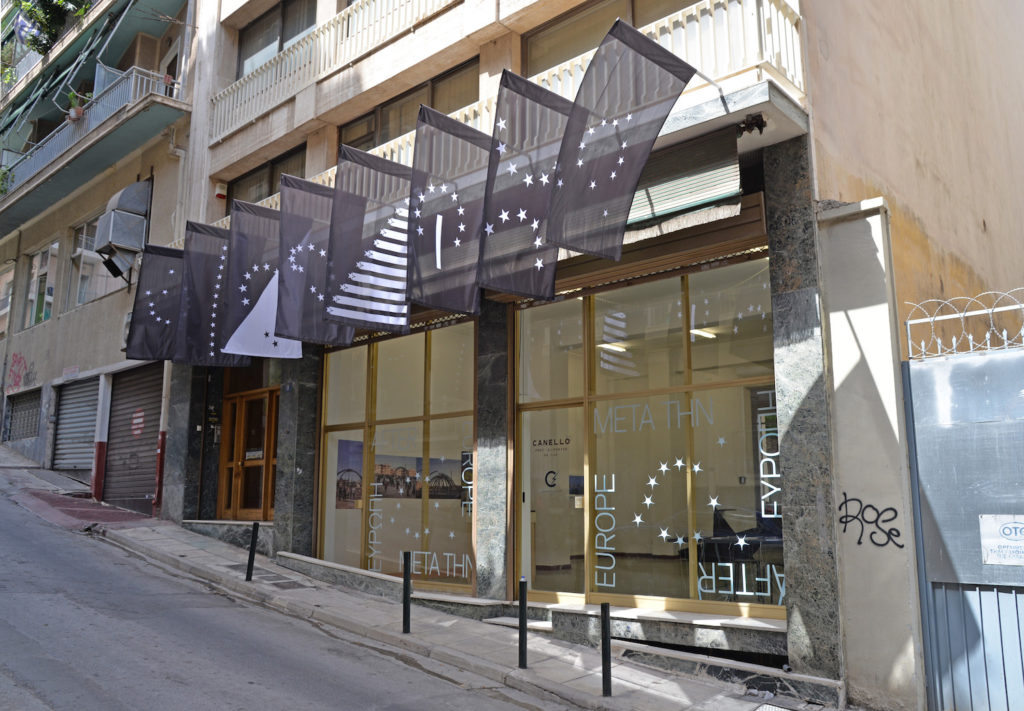 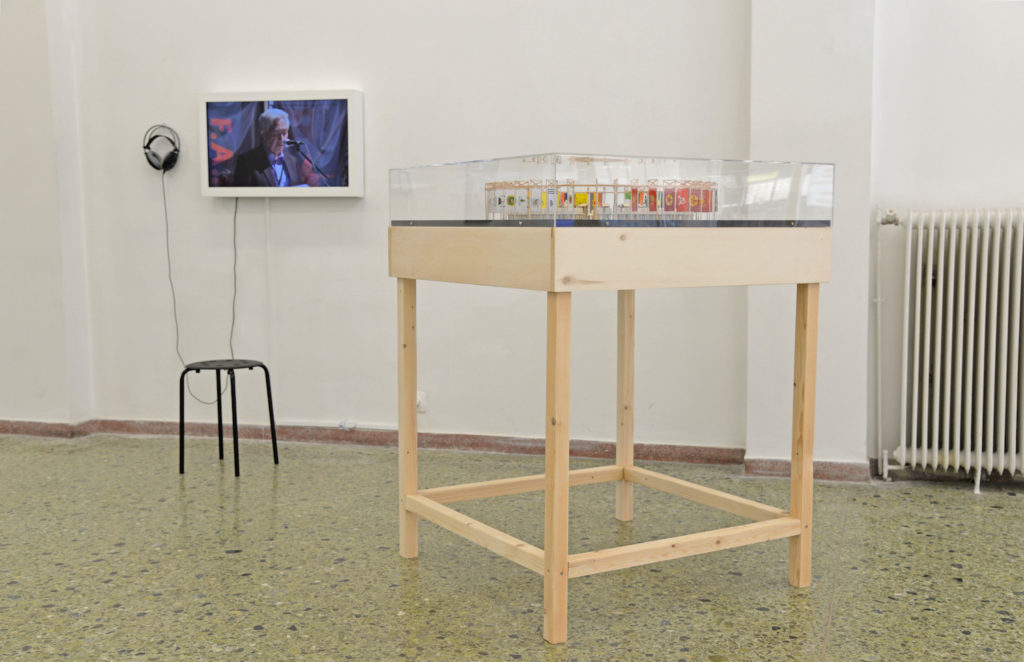 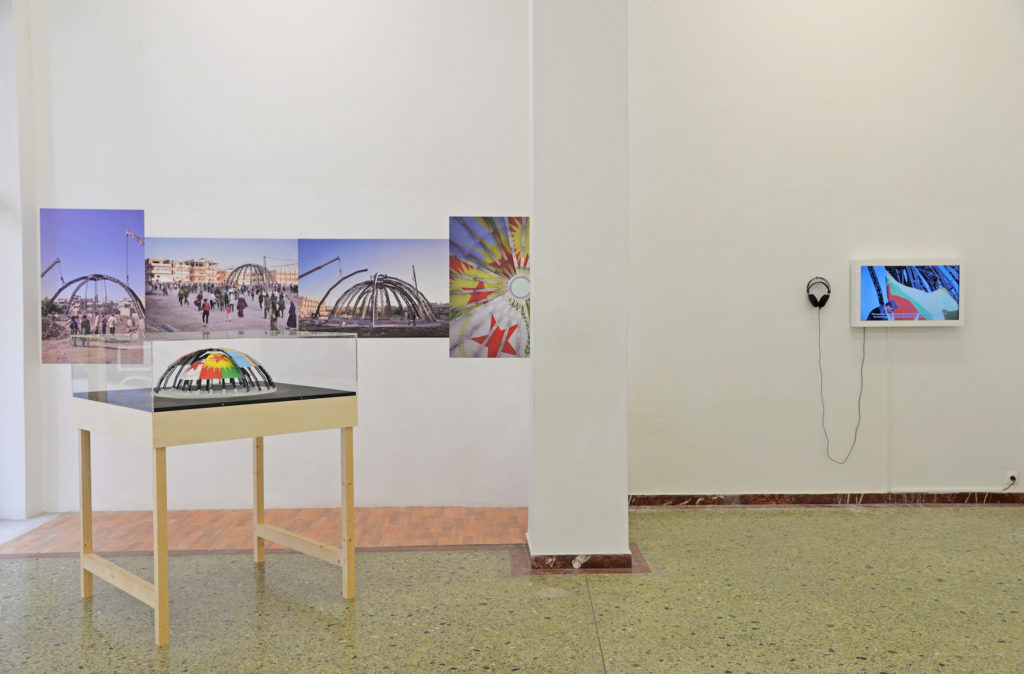 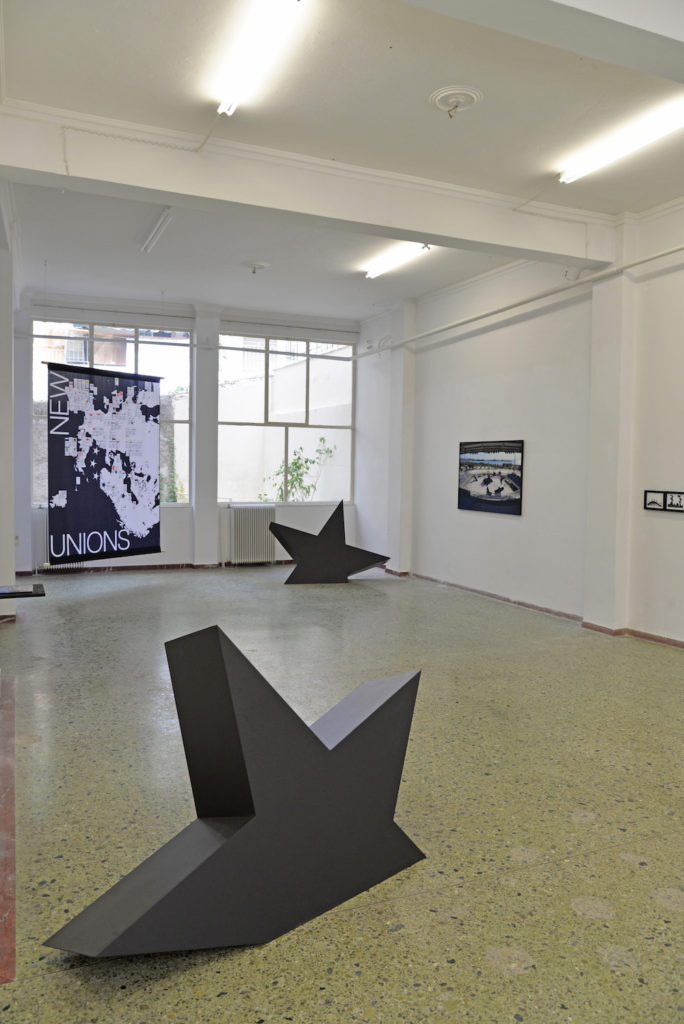 The exhibition After Europe centers on the current political, economic, and humanitarian crises in Europe. Rejecting both the existing managerial and corporate policies of the EU as well as the rise of ultranationalist parties all over the continent, Staal proposes art as a space to criticize and rethink the idea of the political union. What comes after Europe as we have known it so far? Where can the desire and imaginary of art bring us, to establish a new transdemocratic union?

The first part of the exhibition consists of the artistic and political organization New World Summit, which the artist founded in 2012 and since then has developed by creating “alternative parliaments” for stateless and blacklisted political organizations from all over the world. In the past four years, these parliaments have taken the form of large-scale architectural constructions in theaters, public spaces, and art institutions, in which the artist invited representatives of stateless political organizations to discuss the political histories of their organizations and the alternatives they represent, and furthermore to debate the violent policies enacted against them by Western democracies in the name of the War on Terror. From the Basque to the Kurdish and Tamil independence movements, these parliaments became spaces of assembly to propose and discuss alternative world orders. Staal’s New World Summit is currently working on a commission of the autonomous Kurdish region of Rojava (northern-Syria) to build a permanent public parliament for this revolutionary society. As a whole, New World Summit makes visible violent policies enacted in the name of democracy, including the European one, and simultaneously shows the political alternatives proposed by those who have resisted neocolonial and neoliberal policies.

The second part of the exhibition consists of Staal’s New Unions, the beginning of a new long-term project shown for the first time, in which the artist’s research in Athens became its point of departure. This project starts with the current European crises and takes the form of an artistic campaign to support progressive, emancipatory, and autonomist movements all over the European continent to explore the possibility to establish a new transdemocratic union. With the term “transdemocracy” the artist refers to the massive rise of social movements and new political parties throughout the continent that have challenged traditional institutional structures by creating new models of political assembly and decision making. From the civil initiative in Iceland to collectively rewrite the constitution after the economic crisis to new pan-European initiatives opposing the economic terror imposed upon the Greek people. Together, these political experiments emerging out of Europe propose new forms of transdemocratic practices, no longer limited by traditional state boundaries. In this exhibition the artist presents the layout of the New Unions campaign for the first time.

Both Staal’s New World Summit and New Unions, aim to contribute to the imaginary of an age after Europe.

Jonas Staal (1981) lives and works in Rotterdam (NL). He has studied monumental art in Enschede (NL) and Boston (US) and currently works on his PhD research entitled Art and Propaganda in the 21st Century  at PhDArts program of the University of Leiden (NL). His work includes interventions in public space, exhibitions, theater plays, publications and lectures, focusing on the relationship between art, democracy and propaganda. Staal is the founder of the artistic and political organization New World Summit  and, together with BAK, basis voor actuele kunst, Utrecht (NL), of the New World Academy . The first overview of the New World Summit  was exhibited in Moderna Galerija, Ljubljana (“Art of the Stateless State,” 2015) and the first overview of the New World Academy  in Centraal Museum, Utrecht (“New World Academy,” 2015). His projects have been exhibited at the 7th Berlin Biennial (2012) and the 31st São Paulo Biennial (2014), and are further represented amongst others in the collections of the Van Abbemuseum in Eindhoven and Kadist Art Foundation in Paris/San Francisco. He regularly publishes in magazines and journals such as e-flux journal, Art Papers, Manifesta journal, Frakcija magazine, Metropolis M, nY, NRC Handelsblad and de Groene Amsterdammer. He is represented by Laveronica Arte Contemporanea, Modica (IT).