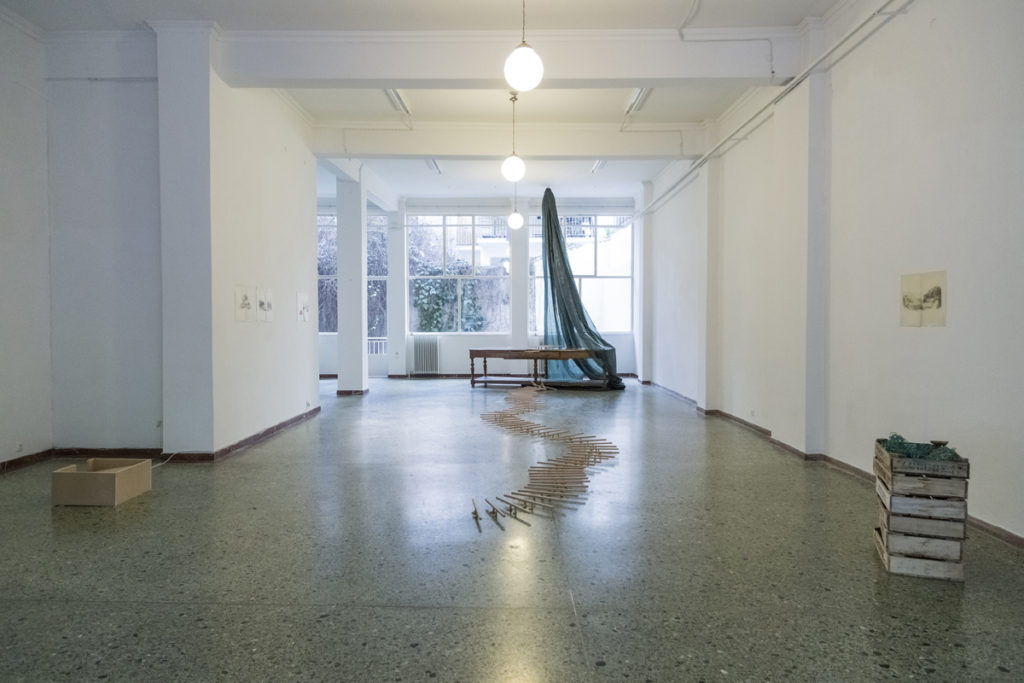 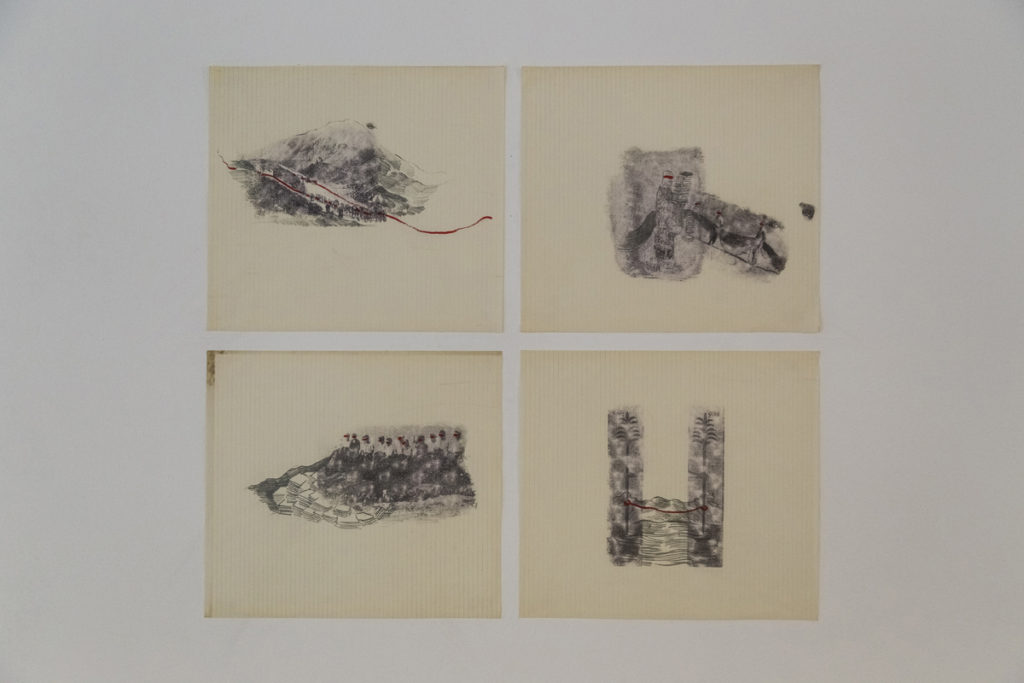 State of Concept is happy to present the first solo exhibition of artist Hera Büyüktaşçıyan in Greece, entitled Fishbone.

“…a shriek remains nailed in the dark corridor like a big fishbone in the throat of an unknown guest…”
Yannis Ritsos, The Dead House

Fishbone is an intervention of revealing hidden aspects of memory, stuck in the “throat” of the mind. Things that have been nailed and forgotten at murky corners of time do not allow the new to pass through in order to become visible. A fishbone may get stuck during a moment when an unexpected particle of language is about to flow out. It is like a wreck that carries the sharp edges of time, and scrapes everything whilst coming out from the spot it is plunged.

This exhibition is an attempt to remove those bits of sharp edges one by one in order to see what has been blocking the path of unsaid words and unspoken memories. The fragments in the show, such as the bronze-legged organisms, the works on paper – in a dialogue with a saint and an angel who heal and bless throats that are blocked by aspects of time –, are a gathering of different memories from the artist’s life itself. Being half Armenian and half Greek, Hera Büyüktaşçıyan’s constant struggle with the language, has a specific role in her memory from her childhood which has also enabled the notion of ”the other” to arise in different levels.

As the greek poet Yannis Ritsos identifies, the fishbone that is nailed in the dark corridors of the throat of our mind… could also be a piece of land…a particle of history…a fragment of a language that does not come out and stays as a shriek deep within.

Hera Büyüktaşçıyan was born in Istanbul, 1984. Graduated from Marmara University, Faculty of Fine Arts, Painting department (2006). Lives and works in Istanbul. The artist uses the notion of the ‘other’ and combines it with the concepts of absence and invisibility, in order to compose an imaginary connection between identity, memory, space & time through “the other”. By using metaphors from local myths, historic and iconographic elements, she opens a new narrative scope for the ‘other’. In her recent works to inquire the meaning of ‘absence’ within the collective memory, she focuses on urban transformation, which causes disappearance, invisibility, isolation and otherness within the framework of communities, history, time, space and memory. Artist in Residence programs she has participated in: ACSL (Yerevan, 2011); PiST/// Interdisciplinary Project Space (Istanbul, 2012); AIRDrop (Stockholm, 2012); Villa Waldberta (Munich, 2012–13); Delfina Foundation (London, 2014). Selected exhibitions she participated in include: “Worthy Hearts” (Yerevan, 2011); “The Afternoon Odyssey” (SALT, Istanbul, 2012); “Looking for Somewhere to Land” (Stockholm, 2012); “Reflecting on Reflection” (Galeri Mana, Istanbul, 2012); “Blur” (Weltraum, Munich, 2012); “Envy, Enmity, Embarrassment” (ARTER, Istanbul, 2013); “In Situ” (PiST///, Istanbul, 2013); “The Land Across the Blind” (2014, Galeri Mana, Istanbul); ”The Jerusalem Show” (Jerusalem, 2014); ”Fishbone” (State of Concept, Athens, 2015); Century of Centuries (SALT, Istanbul, 2015); 56th Venice Biennale, Armenian Pavilion (Venice, 2015).

The artist will discuss the aspect of water, its elements and their relation to memory, space and time through a selection of her earlier works as well as the story of “Fishbone”.