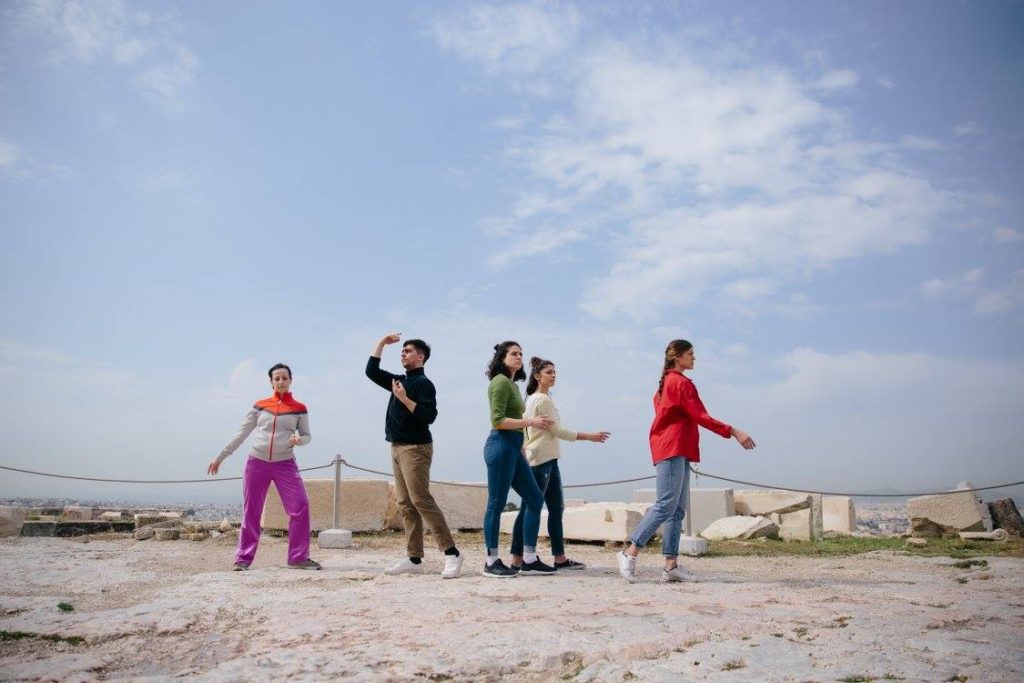 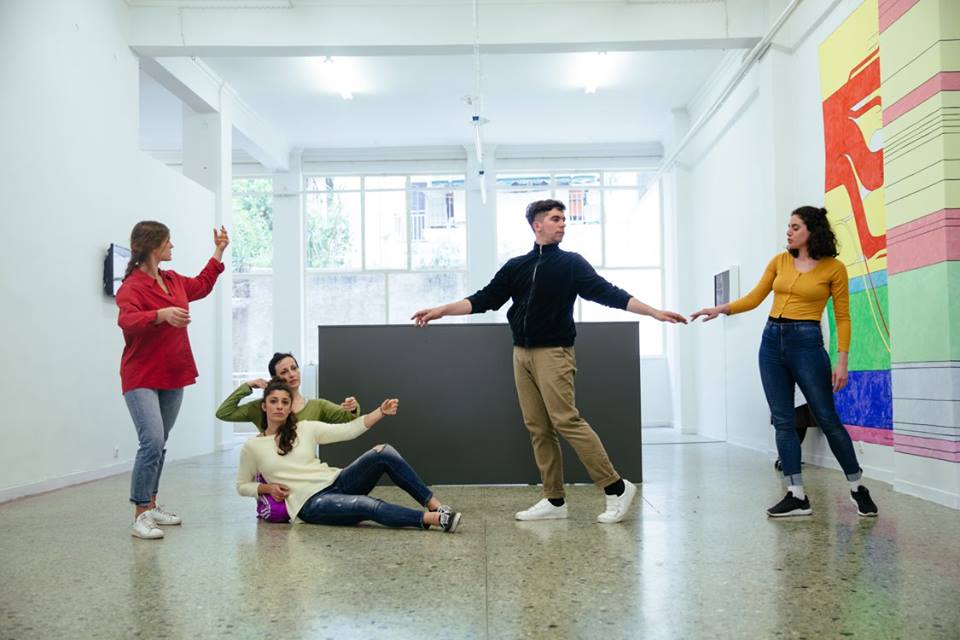 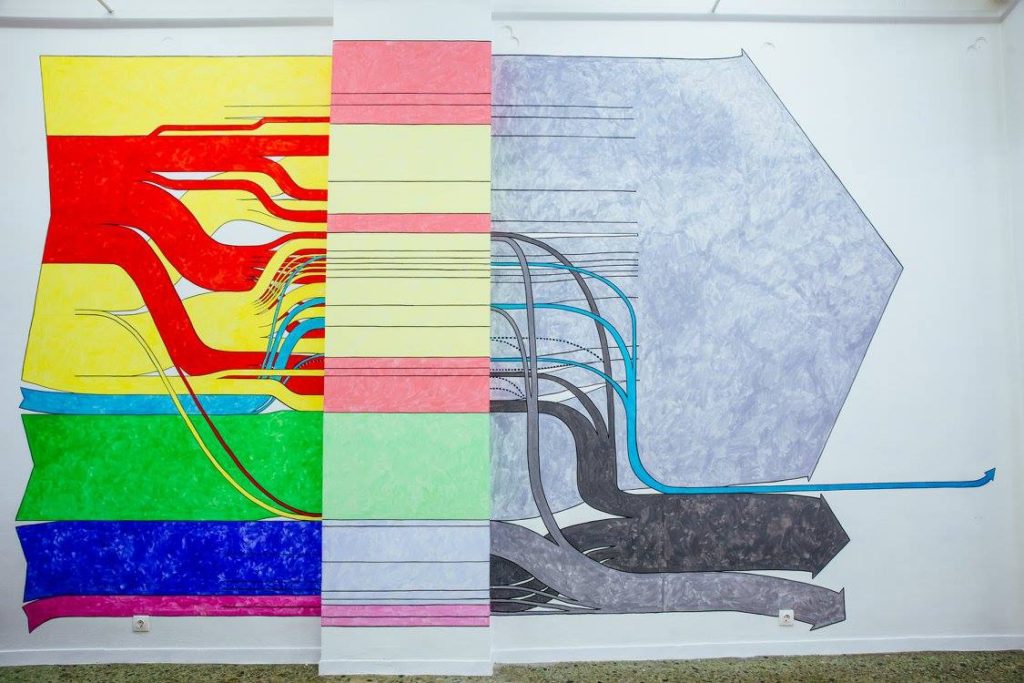 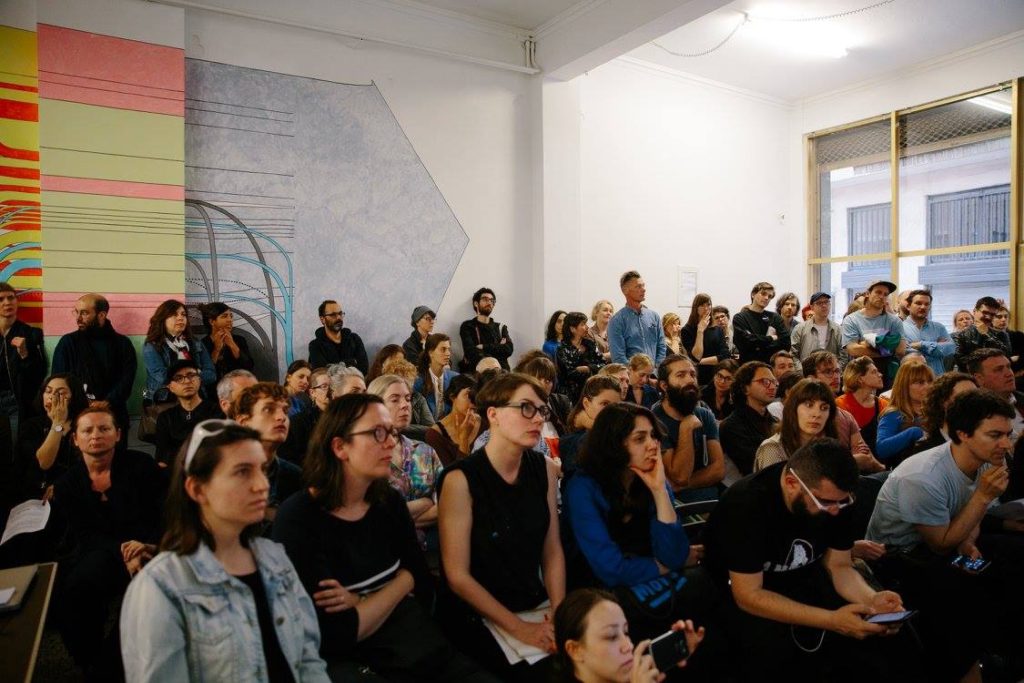 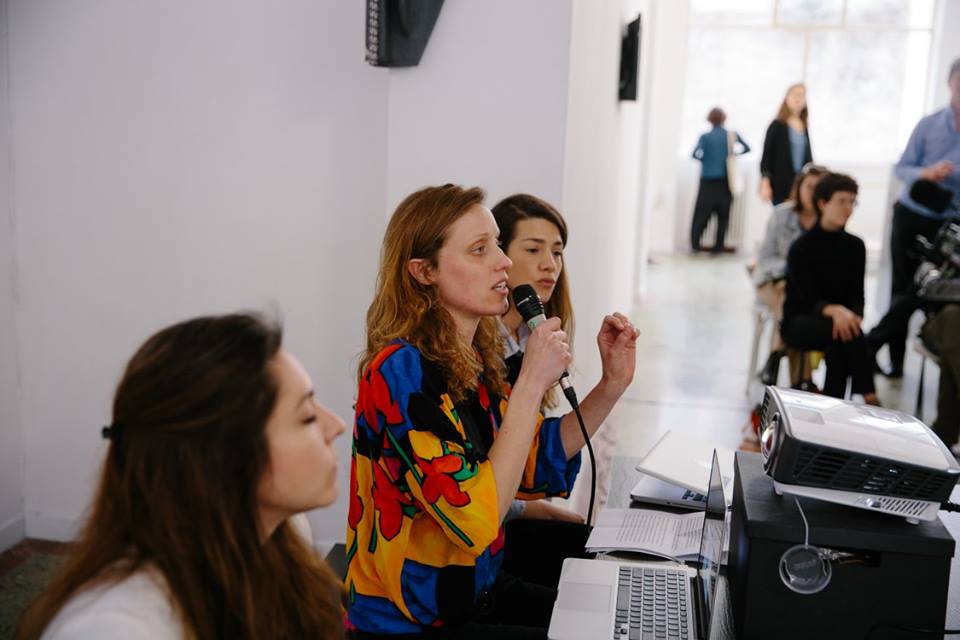 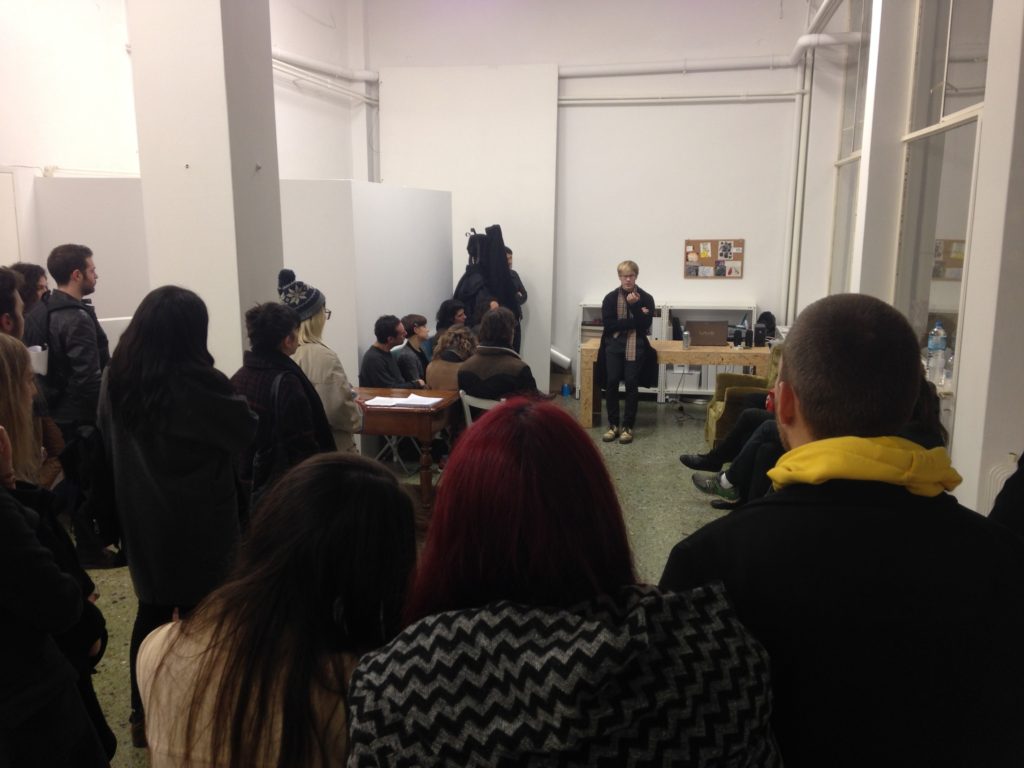 Alexander Tovbord reading excerpts from his Diary, © State of Concept. 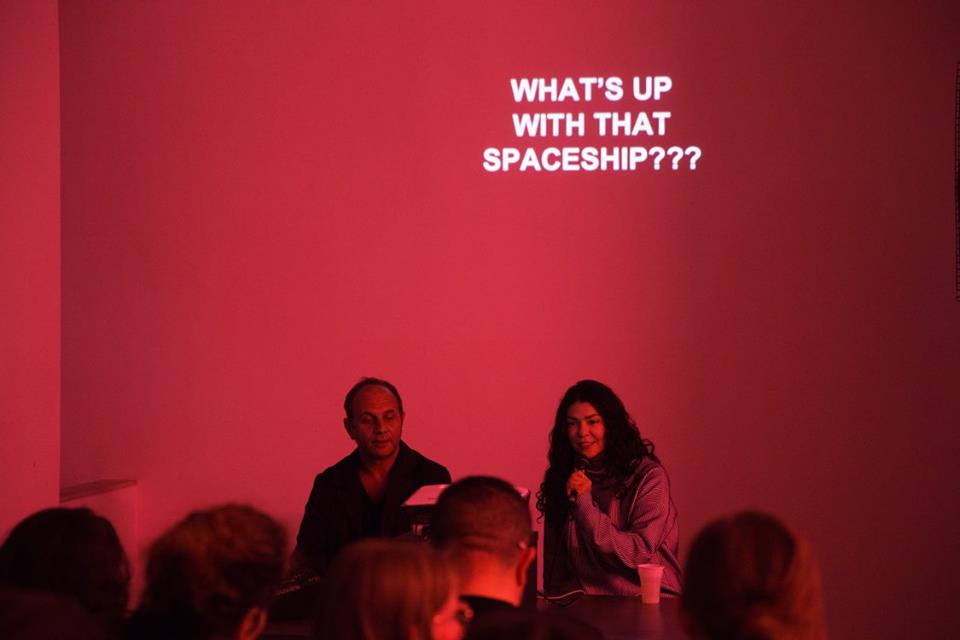 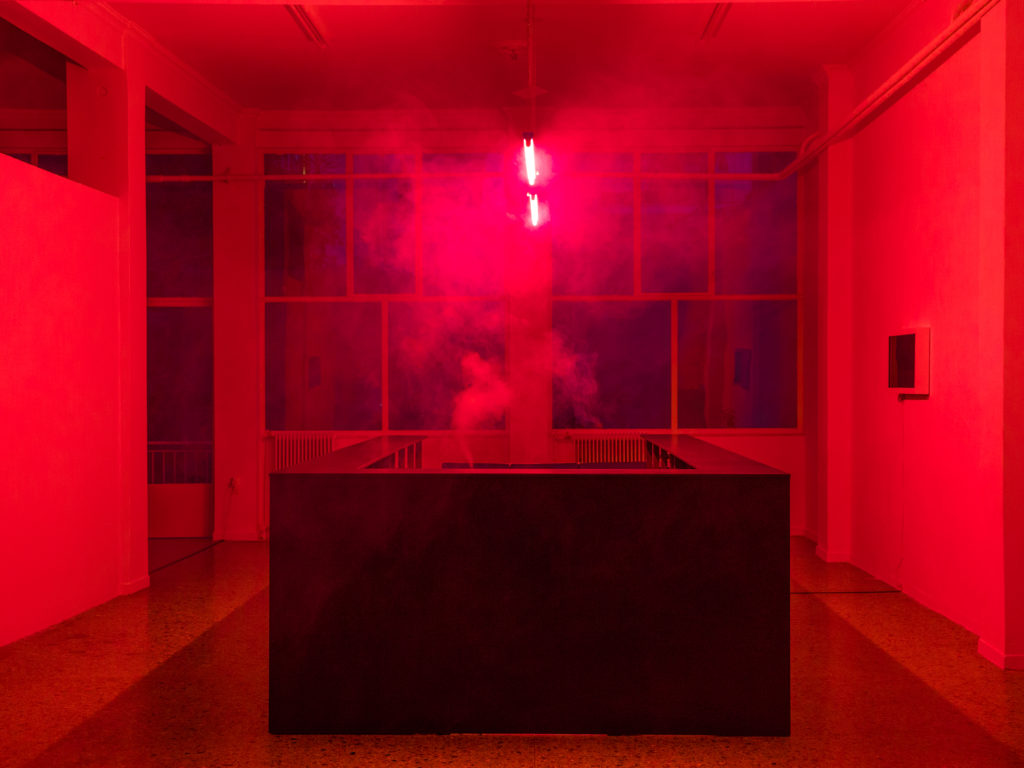 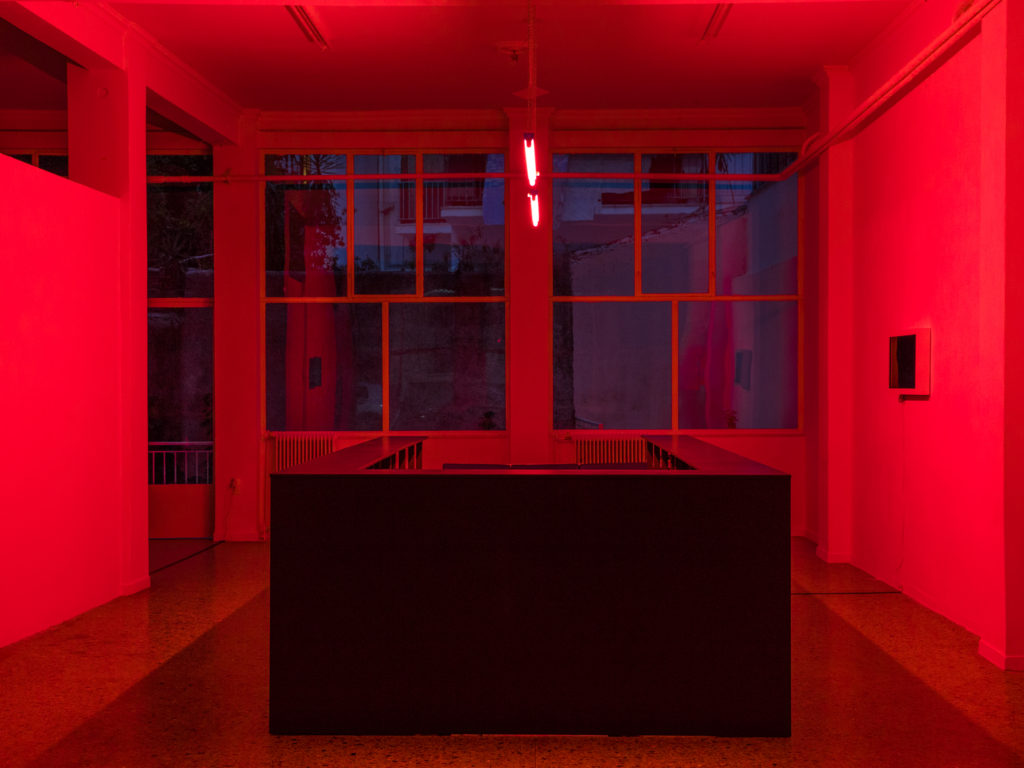 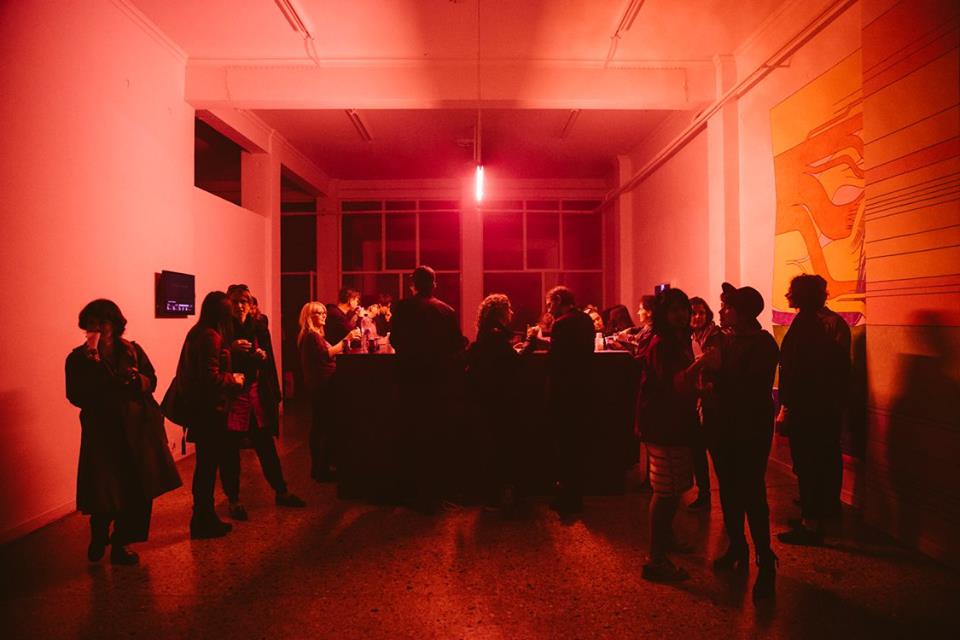 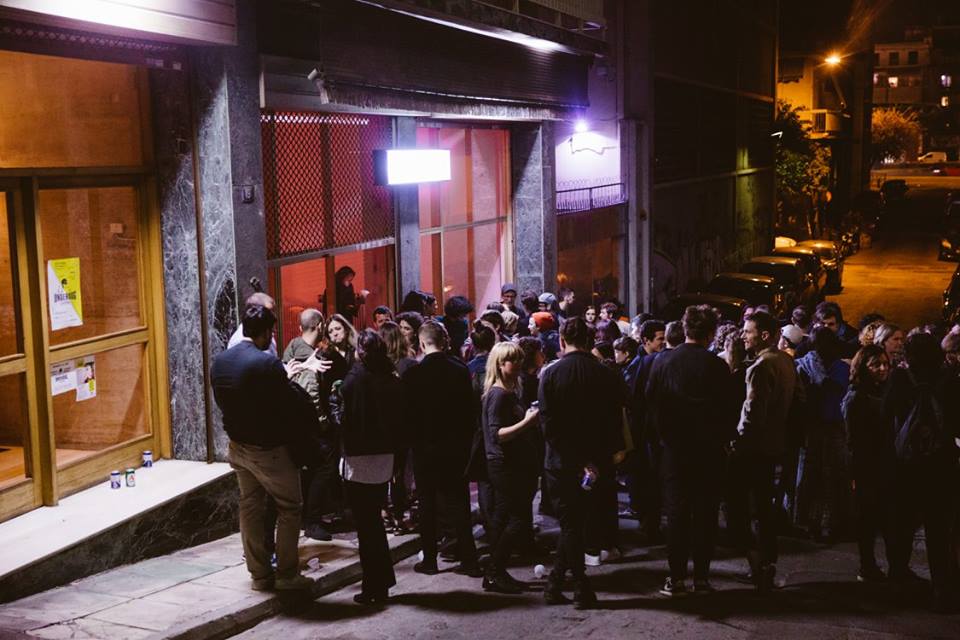 Future Climates: The School of Redistribution

Future Climates launched at State of Concept in Athens with The School of Redistribution, a three-month long exhibition, research and public program: all dressed as a school.

Future Climates is a platform initiated by Antonia Alampi and iLiana Fokianaki that aims to propose viable futures for independent cultural practice. Its objective is to actively shape the forecast of institutional climates by addressing the precarious conditions of individual workers and small-scale organizations of contemporary art. At its core lies the urgency to imagine and implement new sustainable economies in response to the changing weather that affects labour rights, work ethics and funding methods.

In March 2017, Future Climates will launch in Athens with “The School of Redistribution”, a three-month long exhibition, research and public program, and a newly commissioned performance: all dressed as a school. Conceived as a dialogue across contexts, methodologies and practices it wants to investigate the economic conditions that determine and define the work of small-scale organizations of contemporary art and culture in Athens. It will revolve around a central question: how to transform the increasingly precarious existence of small-scale organizations and independent art workers into a more sustainable one, both in terms of economy and work ethics?

The space of State of Concept will be designed by the Studio Miessen and is titled “Χάιτερ μπις Βόλκικ – Heiter bis Wolkig” (sunny with cloudy intervals). As a commentary on the current, post-2008 conflictual relationships across Europe, which – at least partially– relate to linguistic misunderstandings cum spatial separation, Miessen’s intervention consists of a space of conversation based on the typology of a bar, which positions itself within a longstanding tradition of artist-run bars. Precarious times of uncertain futures require different forms of discursive spaces. Instead of formalized institutional conditions, the project claims normative, popular spaces of conversation as a form of practice. Within this, Navine Khan Dossos will realize “Navigating the Numbers” a new wall painting inspired by flow charts of information without content, emphasizing exclusively their infrastructure. The juxtaposition of environmental predictions of climate change, funding applications and cultural hierarchies come together in a complex diagram, a futuristic model of data and movement.

Alexandra Pirici will present a new ongoing action commissioned by Future Climates together with KADIST. “Parthenon Marbles” is a work that tells a story that evolves around the controversial request of repatriation of those marbles to the Acropolis Museum in Athens, as a metaphor and an entry point into a larger discussion about capital, accumulation, circulation, redistribution and the role of the arts within today’s economies. It proposes a performative repatriation, an immaterial version of the sculptural ensemble. This action includes a performed research into the financial and legal implications of the sculptures’ situation: a speculative journey into a “what if” scenario of return developed in collaboration with writer and curator Victoria Ivanova.

Films of Martha Rosler addressing the stressed relationships between institutions, cultural workers and their audience, such as the seminal “Museums will eat your Lunch” will co-exist with sculptural interventions of Alexandros Tzannis, remnants of the previous exhibition hosted at State of Concept, named by the artist as “Athenian parasites”.

Several screenings will take place throughout the three months (please refer to website for further information) amongst them the “Moving Pictures: Artists’ Films from the Film London Jarman Award”, and Nicoline Van Harskamp‘s Englishes.

The research program, commencing on March 27, will include fieldwork, visits to Athens-based organizations, workshops and lectures by international and Greek independent and institutionally affiliated art workers, public programs, and writing. Its aim is to draw on the collective knowledge and experience of its participants to not only address but also speculatively propose alternatives for future scenarios of practice. Participants to the program, selected via an international open call, Denise Araouzou, Jane Fawcett, Ioli Kavakou, Laura Lovatel, Federica Menin, Giulia Palomba, Sol Prado, Rosana Sánchez Rufete and Aris Spentsas, Sara Santana, Dora Vasilakou and Maya Tounta as repondent.

Future Climates – The School of Redistribution is made possible with the support of NEON Organisation for Culture and Development, British Council Athens, Mondriaan Fonds, TANDEM Europe, State of Concept and the voluntary labour of Antonia Alampi and iLiana Fokianaki.

“Parthenon Marbles” by Alexandra Pirici has been commissioned and produced in collaboration with KADIST (Paris and San Francisco).