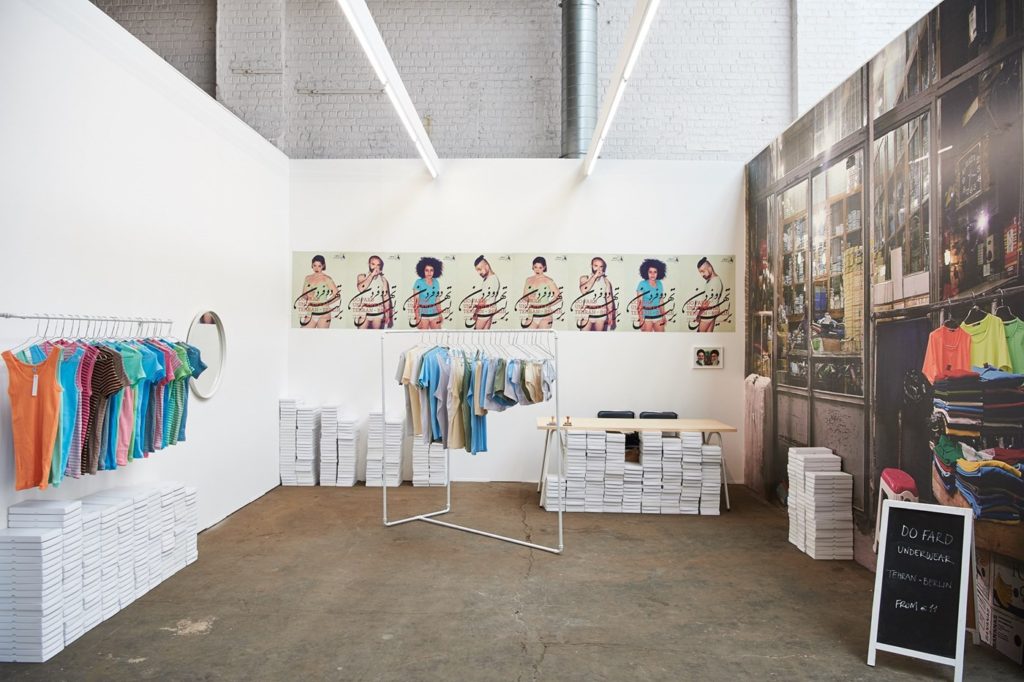 State of Concept is very happy to be participating in this year’s Art Brussels: From Discovery to Rediscovery with the project Do Fard by artist Anahita Razmi.

Since 2013 Art Brussels invites a number of non-profit spaces to the fair each year and gives them a carte blanche to develop an artistic project especially for the fair that transcends the orthodox booth presentations and is more experimental in nature.

For Art Brussels, State of Concept’s booth will be transformed into a fully functioning “do fard” sales stand, where imported underwear “made in Iran” will be on offer. The brand “do fard” (meaning in english: “Two individuals”) has been producing underwear for more than fifty years in Iran, sold through a little shop in the central bazaar of Tehran, its capital.

Artist Anahita Razmi, is in effect transporting this shop, by exporting and reselling these underwear outside of Iran. Her project “do fard / Underwear Tehran – Berlin” first opened its doors in Berlin, a few days after the signing of the Iranian Nuclear Deal that promised new possible cultural and economic relations between the West and a sanctioned country.

A website, a facebook page and an advertising campaign with models wearing the newly available “Iranian Apparel” are part of the project, that challenges how the West sees the Other, in a time where different cultural, ethnological and national identities are faced with one another through politics, immigration, the refugee crisis as well as the economic turmoil currently unfolding within the borders of Europe.

The launch of a relatively unknown Iranian product across borders, challenges stereotypical notions of cultural identity and “oriental products”. Simultaneously operating as a shop concept and artistic work, „do fard“ opens up a discussion space for expectations in relation to Iran, global trade logics, Iranian economics and the nuclear deal, as well as the economics of artistic production and art fair sales.